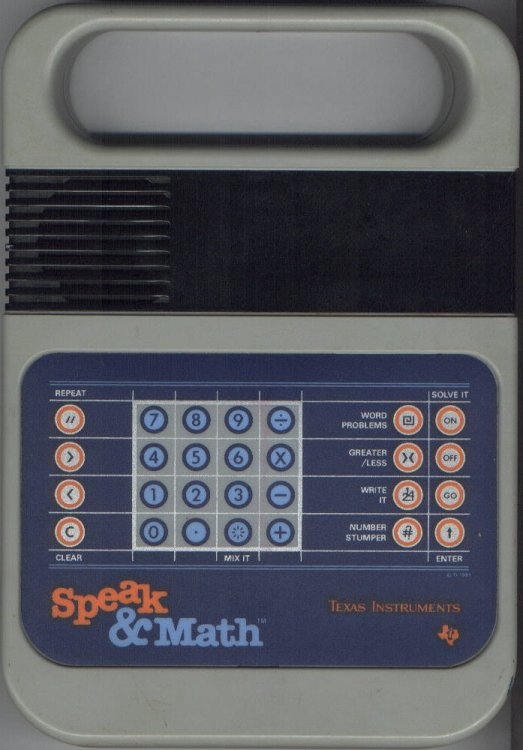 This is a neat toy- I found mine at a thrift store for just a couple of bucks. You can't calculate anything on it (I don't think), but you can play five different math games. As you play each game, you are prompted by the voice for your next input or you are given a clue.

The display is a blue/green color. I don't think that it's LED, but maybe a vacuum flourescent display. Looking inside the battery compartment, there is what appears to be an area for an expansion cartridge of some type. I'm not sure what that's for- maybe different games, or a different voice?

Dave Warren was kind enough to send me a scan of a February 1983 'Computers & Electronics' article by Larry Dighera which details a project in which you interface a Speak & Spell with a Timex Sinclair computer. Although the article describes a Speak & Spell unit, I'm assuming that the technical specs should be similar to the Speak & Math. In the absence of other information, here are some of the details from the article:

In response to my request for more infomation, former TI employee Nick Hulbert was kind enough to share the following story:

"We had recorded and digitized all of the speech words and phrases that would be used in the Speak & Math and working the late shift getting ready for a demonstration the next morning. There were three of us working the final digitized "tweaking" when we realized that one of the phrases was missing from the collection. The phrase was " is greater than or less than". TI was using the professional voice of a radio announcer out of the Dallas area and we were in Lubbock. We knew that we couldn't load the Speak & Math simulator ( no actual unit yet) without the full collection as each word and phrase had a unique address. So we quickly fired up the sound room and recorded and digitized that phrase using the lowest frequency voice of the three of us. We added it to the simulator thinking it would suffice for the demonstration and we could capture the actual voice at a later date. It turns out that the next day while we were sleeping, the demonstration was conducted, the quality control group evaluated the words and approved the voice library. Our co worker Doug Wickey ended up being the voice for the Speak & Math for that one phrase "is greater than or less than". If you have a unit try playing that game and you'll definitely notice a different voice for that one phrase. Don't know how the quality folks missed it but then no one ever complained. Strange that they didn't notice and I hear the difference as plain as day. Doug's voice is not as deep and his diction is much different."
(Nick- thanks for the great story!)

I'm always looking for more information on the Speak & Math. If you have anything that you think would be of interest, please contact me at [email protected].