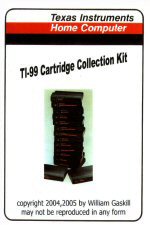 Bill Gaskill is generally acknowledged as the unofficial 99/4A historian and is well known for his Time Line 99 articles. He is also known to have one of the most extensive 99/4a cartridge collections anywhere. Now he is selling a product called the "TI-99 Cartridge Collection Kit." This is a must have for those interested in building up a physical collection of TI cartridges, and for those like myself who are interested in the history of the TI99/4A. His kit includes scans of source documents and illustrations of TI stuff not available from other sources such as Mike Wright's CYC CD and the Western Horizon ftp site at ftp.whtech.com.

For $35 ($39 outside the USA), which includes shipping, you get a printed instruction sheet, a book, and a computer CD that can be used with a PC or a Mac. For me, the really neat stuff is on the cd, which contains over 1000 files from Gaskill's personal collection, plus pre-populated PC99 and MESS emulator databases in Personal Record Keeping and TI-Base format to track your own collection. By changing the MESS file names from *.dsk to *.TIDisk these files can also be used with Cory Burr's excellent free Win994a simulator available at www.99er.net. The Cartridge Collection Kit instruction sheet has an annotated listing of the cd's directory structure and specific instructions on how to use the PRK and TI-Base emulated data files. You have to supply your own PRK cartridge image (commonly available) or TI-Base disk image.

The book is spiral bound and has a very professional looking glossy front cover. Inside are articles by Gaskill on the history of cartridge software in general, and TI Command Module cartridges in particular. You learn about cartridge types and packaging types and about the various different labels that have been used on the same cartridge. Some of the book material has previously been available from Bill as his "Collecting Cartridges" articles, but there is new stuff here as well. There are written descriptions of rare and never released cartridge software, including some for which only descriptions and not actual software exist. Of particular interest is the "Catalog Cartridge Scarcity" rating. This is an objective rarity rating system based on the duration of time a cartridge is actually offered for sale in published catalogs. Presumably if a cartridge was actually advertised for sale then, for a while at least, it could actually be purchased. For example, "The Attack" earns a 7.15 whereas the much less common "Terminal Emulator I" earns a 0.31. This system is objective, rather than subjective, in that different people with access to the same published catalogs would be able to calculate the same rarity number. Some cartridges that are only known from one or two examples, or are only known from code that was never released, are listed but given a "N/A" scarcity rating.

The real gem of the Cartridge Collection Kit is the cd. This too has professional looking label. The PRK or TI Base data files do a good job of provide interesting details of Bill's personal collection and will do a good job tracking your own collection. They have lots of fields to store information about each cartridge. The really good stuff is the rest of the cd, in the form of numerous *.pdf and *.jpg files. Here you will find scans of almost TI every cartridge ever sold, along with manual covers and packaging styles. If the same cartridge title had multiple label styles, they are all shown. If the same cartridges was sold by TI and by its third party author, the third party version is shown as well. Familiar TI titles released in Europe in multi language format have unique labels and these are on the cd. The famous TI Calc cartridge, only sold for a few days in a few European locations, can be seen. Covers of all the manuals are shown, and if there are different manual covers for the same cartridge titles, these are all there for you to look at.

And the TI brochures, many in full color. All those neat brochures TI made over the years are there on the cd, from the beginning of the 99/4 to the end of the 99/4a, the 99/2, and the CC40. As many of you know, I have an extensive collection of TI literature that I scanned and uploaded to ftp.whtech.com, so I was amazed to discover how much stuff in the Gaskill collection I have never seen before. One of them shows Bill Cosby holding a CC40 in one hand and a wafertape in the other. Yes, a genuine TI wafertape for use with the never released wafertape digital tape drive. Obviously this brochure didn't get wide circulation. Or how about the brochure with Bill Cosby, with a big grin on his face, holding a 99/2 under his chin. Inside the brochure there are pictures of the packaging that 99/2 cassette software will comes in and a list of 19 available software tapes. I once owned a 99/2. I know of no one who has ever actually seen any of this 99/2 software, but it is nice to see it illustrated in the brochure.

The Childress photos are a unique part of the Gaskill cd. TI contracted with Childress Photography in 1983 to do all its promotional photography. Many of these images were never used before TI withdrew from the home computer market. They display beautifully on my 1024x768 pixel monitor. My favorite shows what appears to be a beige 10 inch monitor, beige joysticks, and a beige 99/4a console to which is attached a beige speech synthesizer and a beige hexbus adapter. Beige everything was to be the future of TI computing. Other Childress images include a large variety of point of sale display furniture used display TI cartridges in retail stores. There are also photos of the "Entertainment Value Pack" box, which has an image of a 99/4a with beige speech synthesizer on its front. Also, there is a photo of the "Variety Value Pack." I have never actually seen either of these items at any store or at any TI faire.

John Phillips gave Bill images of personal documentation relating to his employment with TI. Included is the document that awards John a 99/8 in appreciation for his service. The document says that he is not allowed to sell or give away his 99/8.

Some previously published material is on the Collecting Cartridge Kit CD. Bill Gaskill's Time Line 99 is there as are newsletter articles relating to cartridges, including some by myself. All the IUG newsletters are on the CD, as are all issues of TI's official newsletter that was mailed to registered 99/4a owners. There is lots of other stuff on the CD that I haven't described. That's because I haven't had had time to view everything yet. 1000+ pdf and jpg images take a lot of time to view and appreciate.

Bill gave me a complementary copy of Cartridge Collector's Kit in exchange for which I agreed to study the product and suggest changes or enhancements. This product review is my own idea and is not part of any agreement between Bill and myself. Would I be actually willing to spend $35 of my hard earned money to purchase the Kit? Knowing what I do now, having seen the product, the answer is definitely yes!

I have spent many pleasurable hours reading the Collecting Cartridge Kit book and, especially, viewing the docs and images on the CD. I have been involved with the TI community for many years and it is exciting to me when I can access "new" material about my favorite computer.

To order or ask questions Bill Gaskill can be contacted at [email protected]. He will accept personal checks, money orders or a paypal cash payment.